The Anatomy of a Dress Shoe

Talking about dress shoes – whether it’s what defines a certain style, what makes one shoe superior to another, or just an understanding of what’s on your feet – requires at least a fundamental knowledge of the construction of classic footwear.

So let’s break one down from the ground up – literally. We’ll walk you through each component – what it is and what it does – layer by layer, starting with the sole.

Outsole. Ok, more specific than the sole, which is actually made of a few layers itself, we’ll start with the outsole. When you turn your shoe over, the outsole is what you see. It’s the part that hits the ground running – literally. Classically made out of leather, you can also find options in rubber, crepe, and other synthetics. The shape of the outsole (or the entire sole) is called the last, which determines the profile of the entire shoe.

Heel Stack (or block). Part of the outsole, the heel stack is pretty self explanatory. In classic leather soled shoes, the heel is formed from extra layers of leather that lift the heel of the foot. With synthetic soles, this can be made from a block of rubber or other synthetic.

Footbed Filler. The layer in between the outsole and the insole is the footbed filler. It’s never seen, but is crucial to the feel of a shoe. Quality shoes have a cork filler that forms to the wearer’s foot over time creating a unique and personalized fit.

Shank. Most dress shoes also include a metal shank that lies between the outsole and insole directly forward of the heel. The shank gives structure and support to the arch of the foot. 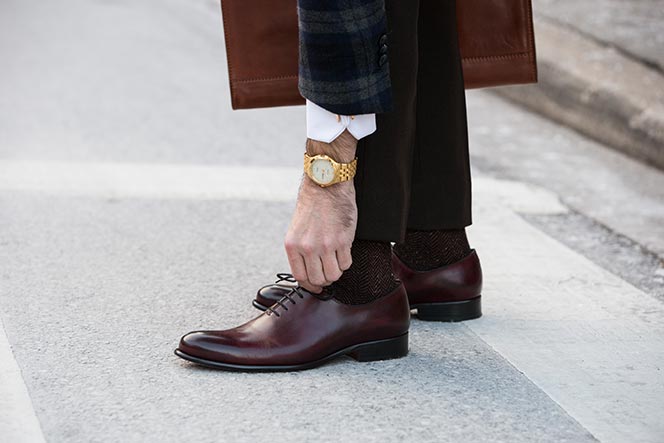 Insole. The insole is the layer you see inside the shoe. It is almost always made of leather, although some more casual styles will use a textile layer. The insole covers all those pieces that lie directly above the outsole.

Welt. The welt is a strip of material and subsequent stitching that connects the outsole to the insole and seals in all of the other sole components. The welt can be constructed in a variety of ways, with the Goodyear Welt being arguably the most popular due to its durability and weatherproofing, but other stitches like the Blake welt offer a more streamlined appearance. Cheaper, mass-produced shoes are glued rather than stitched, which provides an arguably significantly lower level of quality.

Upper. The upper is another self-explanatory term, and refers to all of the combined components above the sole – basically, all of the following comprise the upper part of the shoe.

Quarters. The portion of the upper that starts at the laces and runs under the ankle bone and around the back of the heel. Quarters secured under the vamp are referred to as closed lacing, while quarters stitched over the vamp are open lacing, a distinction that differentiates oxfords and derbies. Vamp. The portion of the upper that covers the instep, usually secured under the quarters and over the tongue. Additionally, the very top portion of the vamp that runs right below the lacing and quarters is referred to as the throat.

Toe Cap. Another optional component, not found on styles like whole-cut shoes, the toe cap is an additional layer of leather stitched over the toe that provides additional strength and durability as well as a decorative appeal. Sometimes this layer is found beneath the upper and out of sight, in which case it is referred to as a ‘puff.’ Backstay. A short strip of leather that runs up from the sole at the heel and connects the quarters of each side.

Saddle. A leather strip that runs over the instep, reaching down the sole on either side of the foot. Occasionally this piece is made from a contrasting color of leather or fabric.

Eyelets. The holes punched in the leather along the instep to allow the insertion of the laces.

Lining. The lining is a layer of leather stitching into the inside of a shoe, and is the piece that comes in direct contact with the wearer’s foot (or sock). Usually made of a softer, more pliable leather for comfort.

Foxing. Foxing is an optional component of trimming that runs around the ankle opening, usually found on brogues and wingtips.

That’s a heck of a lot of pieces, right? And we didn’t even hit every miniscule component. Sure, we got the big guys, but there’s actually quite a few more, from the rand (a part of the heel) to the heel counter (helps give shape to the heel), the list would just go on and on. Kind of makes a guy appreciate why a quality piece of footwear can cost well over $200, doesn’t it?

Featured image via Allen Edmonds. All other photos by Rob McIver Photo.