Why Your First Suit Should Be A Navy Suit

Because navy just might be the most versatile suit color, among other things…

When you’re building your first respectable wardrobe, everyone here at HSS is firmly behind the idea that your first suit should be a navy suit in hopsack or a “four season” wool. In fact, it’s a pretty widely agreed upon stance across the menswear world. But why? Why is navy such a great choice for your first foray into the world of men’s tailoring?

If you ask me, it comes down to one simple priority – versatility. When it comes to the foundations of your wardrobe, especially when you build from the ground up, versatility is key, and nothing is more versatile than a navy suit. Here’s why. 1. Wear it (pretty much) anywhere. First, think of dress codes – a navy suit hits almost all of them. Short of black tie, you’ll be hard pressed to find an occasion where a navy suit is inappropriate. Business casual and even business formal are pretty flexible, but a navy suit satisfies the trickier dress codes just as well, from cocktail attire to the more formal end of things. 2. Dress it up or dress it down. Which slides easily into the idea that a navy suit is just so easy to dress up or down to fit your needs. Think of the suit itself as a blank slate and swap out the other pieces accordingly. A navy suit over a t-shirt and clean white sneakers is a perfect summer casual look. A navy suit with a solid white shirt, repp-stripe tie and white pocket square is the ideal go-to, middle-ground outfit for a job interview. A navy suit over a patterned shirt with a bold, peppy tie and monkstrap shoes is an effortless way to flex those sprezzy muscles.

3. Easy to match. Getting down to some technicalities, a navy suit also has the benefit of being incredibly easy to match with, colorwise. Brown shoes and brown belt – perfect. Black shoes and black belt? Just as good. A classic men’s wardrobe tends to be dominated by blues, greys, and tans, all of which are a perfect complement to a navy foundation. 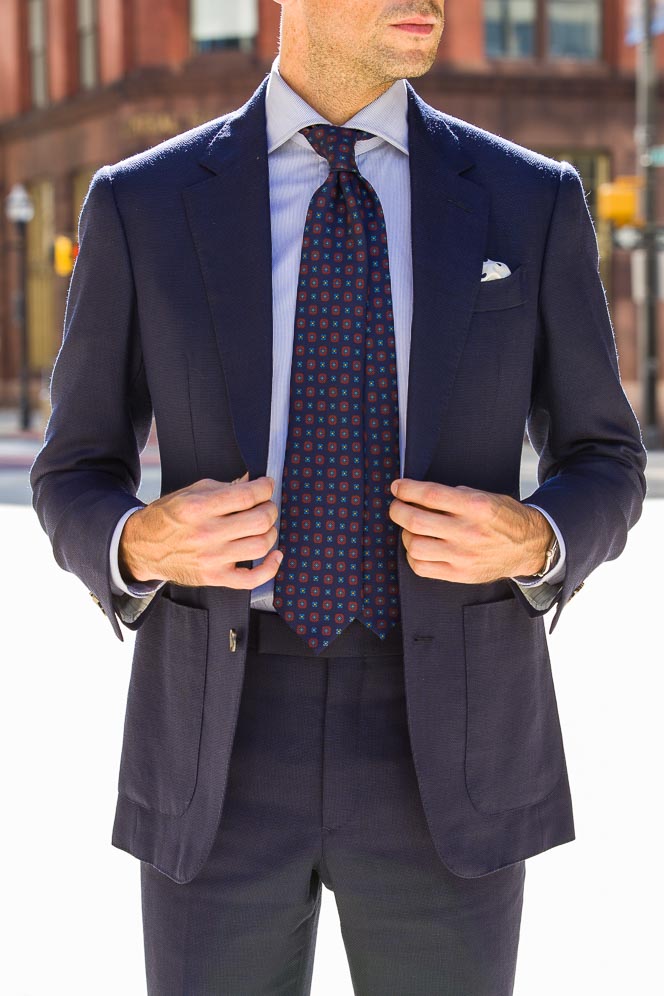 4. A strong separate game. Finally, the versatility level just explodes when you consider the idea of suit separates. The one piece of menswear more timeless and classic than a navy suit might just be a navy blazer – get the right navy suit and you’re set on both fronts. Rock the jacket with anything from ivory linen chinos to worn-in, light wash denim – and then try those suit trousers with a luxe knit polo or under a rustic tweed blazer. Think of the all the other men’s staples, and you’ll be hard pressed to think of any that won’t work in some way with a navy suit. “Endless opportunities” is a term that gets thrown around a lot, but here it’s really the only way to put it. At the end of the day, when you’re just starting out in the world of respectable attire, you’ve got to make sure that those initial purchases have that versatility necessary to form a foundation in your wardrobe. And there’s no better way to do that than by starting with a navy suit.