A global footwear icon, the desert boot is the quintessential “dress casual” (or “sharp casual“) shoe. Here’s a short historical primer as well as some desert boot style tips. The story of the desert boot begins with the story of Nathan Clark. In 1941 while stationed in Burma as a member of the British Army, Clark noticed some of the officers in his outfit wearing some interesting and comfortable-looking ankle boots during off-duty hours.

He discovered that those boots came from Cairo’s Khan elKhalili bazaar and had been commissioned by British Eighth Army officers as a replacement for their issued boots, since they couldn’t hold up to the harsh desert conditions. These boots were based on the South African veldskoen.

Inspired by the design, Clark created prototypes out of newsprint and sent them back to England, convinced they would augment the offerings of his family’s shoe business.

Upon returning to England, Clark began to experiment with materials for his new boot design. He settled on suede for the upper – most men’s shoes of the day were made of stiff leather – and used crepe rubber for the sole.

Clark unveiled his desert boot at the 1949 Chicago Shoe Fair. The simple silhouette and unusual crepe sole captivated style editors, who wrote rave reviews of the new design. Since then, the Clarks desert boot has gone on to become a true global footwear icon. 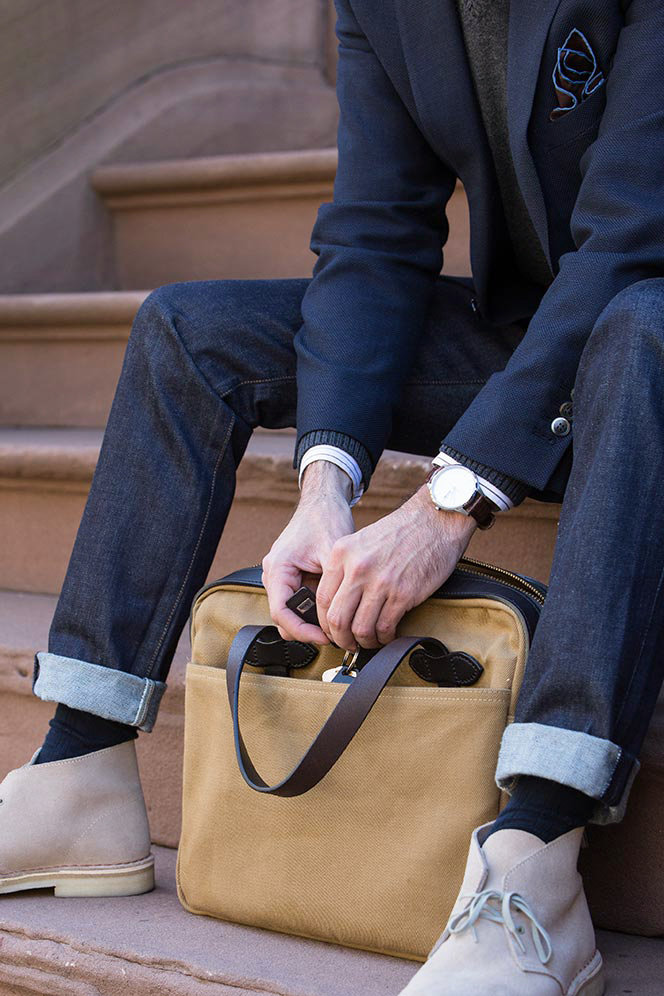 HSS Style Advice: Aside from being a global icon, the original Clarks desert boot is stylish and extremely affordable. Chose one in a light, neutral suede as I’ve styled here, or a classic brown leather. Either one can be easily dressed up or dressed down.

Desert boots pair effortlessly with denim. It’s almost like they were made for each other. With a well-worn pair of jeans, they’re your casual go-to. And styled with slim dark denim and a blazer, they’re dressed up enough for a casual Friday at the office.

For a slightly different look, wear them with a pair of neutral corduroys. For fall, I like dark brown or slate gray. It’s a somewhat dressier take than pairing with denim, but keeps some of that “rugged elegance.” Plus, suede and corduroy – don’t forget that fall texture!

In partnership with Clarks. The opinions expressed herein are mine alone and are not indicative of the opinions or positions of Clarks.