Once you’ve covered the basics with the suits in your wardrobe—navy, grey, and black—it’s time to start thinking about branching out and supplementing your collection. I’ve written before about the possibility of a brown suit or plaid suit as options for your first “next level” garment. But now that it has become downright cold outside, I thought it would be the perfect time to talk about another great option—a tweed suit. There are many advantages to adding a tweed suit to your collection. First of all, tweed is a seasonal fabric. Though it is less versatile than a four-season fabric—as in, you won’t want to be wearing tweed trousers in the summer—you can absolutely maximize it’s potential throughout the fall and into the winter by wearing the jacket separate and pants separate. Then when winter hits its stride, break out the full two piece—or three piece. More on that soon.

But perhaps more than anything, it’s always nice to retire some of your clothing as the seasons change and introduce new pieces into the mix. A tweed suit fits that bill perfectly. It is always a little special when I pull it out for the first time. 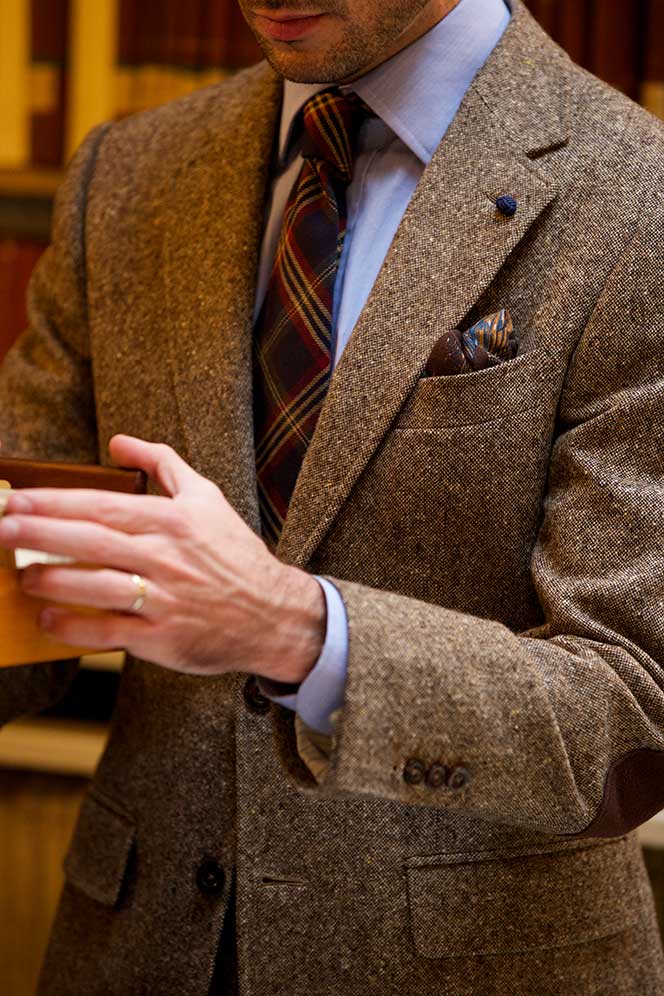 Though tweed was originally worn by hunters—one of the earliest forms of camouflage—it has come to be widely associated with collegiate, or perhaps more accurately, professorial style. I definitely developed an affinity for tweed during my college and graduate school years and lusted after a tweed blazer with elbow patches for nearly a decade.

A tweed suit has a lot of texture. When you’re styling it with a tie, be sure to choose one with a fabric that complements the tweed. A wool plaid tie is a great choice. And always remember as a rule of thumb that, unless it’s white, your pocket square should never match your tie or shirt exactly.