What Is A Signet Ring And Why Wear One?

Is the signet ring one of the last true hallmarks of authenticity?

It was as reliable as a signature, a seal of authenticity that branded a document. In a world where the majority of men were illiterate, the signet ring became their writing instrument. An instrument responsible for signing some of the most historical documents long ago.

This is where the story begins.

On the hands of rulers and world leaders, potentates and their officers. What began with a fundamental purpose, soon became a mark of nobility, of status that sealed a man’s place in the history books.

In Ancient Rome, Greece and throughout history, the signet ring was one of the most valuable items a gentleman could have. The men who relied on them kept them under lock and key, only to bring them out as needed when signing a deed, will or other important documents. As the decades passed and monarchs adopted more ornate attire, the signet ring went from practical and simplistic to fashionably eccentric. When the owner eventually died, the ring would often be destroyed with him, not handed down to his son the way it was so prominently done in the 1800s and onward.

Today, signet rings are far less necessary. For the men who do wear them, it is simply an heirloom handed down through generations. A symbol of fraternity such as belonging to the Freemasons, or a fashionable mark of sophisticated grace that, when worn correctly, elevates the style of a rakish gentleman.

Although there is a vast number of jewelers who make and sell signet rings, only a handful of them do it well. Most are machine made, or hand engraved the same as any other jewelry. But heritage makers like Rebus and Ruffs still craft these rings expressly by hand, all made to order, and all either cast or die stamped according to the buyer’s wishes. An intensely personal process, there are relatively no standards of what’s acceptable in this modern world. Designs range from the traditional crest, monogram, and coat of arms to more contemporary skulls, logos and tattoo-inspired artwork.

There seem to be two types of buyers these days. The first is the traditional gentleman who prizes quality craftsmanship and places value on the importance of an heirloom-quality bespoke ring. The second is the young man with interest in flashy bling and who will wear it with white sneakers and a body full of other bling. So the question begs to be asked about what type of ring a classic dandy should consider.

Well, that depends on your price.

Signet rings are not cheap. You could certainly visit a local jeweler and have one made, but it won’t have the same panache as the real thing. For that, you need to purchase a vintage ring on eBay or visit a purveyor that specializes in bespoke signet rings such as Rebus, Ruffs or Dexter if your budget is on the lower end.

Available in sterling silver, platinum, and white, yellow or rose gold, the signet ring increases in price not just based on the materials used, but also the complexity of the design. Since each ring is custom made by hand, having an intricate coat of arms engraved in reverse is far more complicated than a simple initial. With history in mind, this deep reverse engraving ensures that like the rings of antiquity, you can use it as a seal ring to create a wax impression that is an accurate three-dimensional representation of the ring’s artwork.

For years, men have struggled with the question of whether to wear a signet ring with the seal facing towards them, or away from them. This is a common question asked by Freemasons, who often postulate whether the Square and Compasses should point to them or away.

There are many schools of thought on this. Some believe that the seal is a reminder of your duty to family or the association the seal belongs to. Therefore, they believe it should be worn facing you as a constant reminder in times of trial and tribulation.

Others believe the ring is a symbol to the outside world and should be worn facing them and not you.

There is no correct answer. However, after writing numerous articles on signet rings and lecturing on the topic, it is my belief that the ring should be worn facing outwards. As a symbol to the world showcasing what you stand for. The same as if we wear a necklace with a pendant on it, the pendant faces outwards and down, not up in the direction of our face.

An even more difficult question to answer is what finger the signet ring should grace. 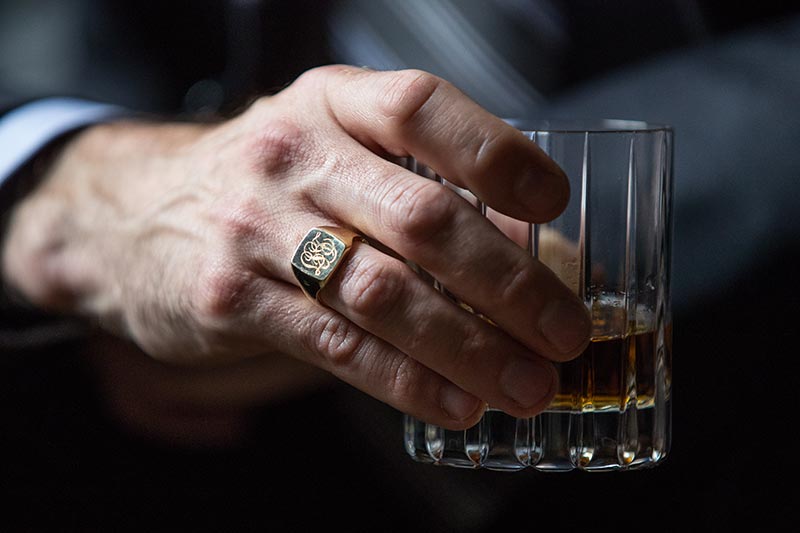 With ten fingers, there are ten answers and various reasons behind each one. Traditionally, this depends on you and your background. Those who wear signet rings as jewels in the Middle East will often wear very bold and ornate rings on the thumb or middle finger. This is certainly a statement piece which is why it’s worn on the boldest digits. In parts of the developing world many believe that the finger a signet ring is worn on should be decided based on astrology or other beliefs.

However, in America and much of the first world, the most common fingers to wear a signet ring on are the pinky, the ring finger and the forefinger. The pink is the most appropriate finger for the rakish gentleman. It is less obtrusive. It doesn’t not inhibit movement or dexterity and it is far more subtle, yet still noticeable which makes it a refined and elegant choice. For unmarried men, wearing one on the ring finger in America could limit your ability when trying to court as the ring might be mistaken for a wedding band leading them to think poorly of you and negatively affecting your reputation.

In the end, how you wear your ring is entirely up to you. There are no rules, except that it is highly recommended not to wear a ring you aren’t entitled to. Even if it’s inherited. Rings such as class rings, masonic rings, military branch rings, firefighter rings are all rings which a person must earn the right to wear. It is entirely possible that wearing a ring you haven’t earned could result in inadvertently offending someone or plaguing you as a Walter Mitty.

Since these rings are crafted with such precision, they are quintessential heirloom items. With that in mind, I recommend sticking with a design your rightful heirs will be proud to wear. A simple monogram, family crest or coat of arms over a skull and crossbones, a signature or your Max, your family schnauzer.