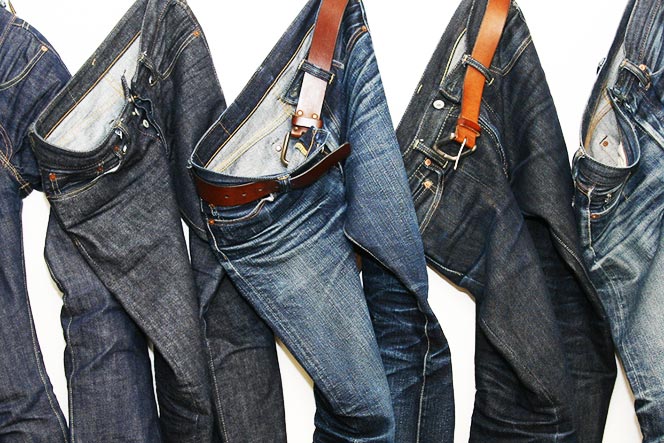 What is raw denim? The simplicity is in the definition.

There are lots of variations on premium denim these days – selvedge denim, “designer” denim that merely touts a covetable name, denim made from tech-y and stretchy fabrics (yeah, we aren’t quite sold on those either), and on and on. But if you’re a true denim-head, raw denim is where it’s really at.

And part of what’s so great about raw denim is just how simple the concept is. Raw denim is really just that – raw. Meaning, the indigo-dyed denim hasn’t been washed, rinsed, or processed in any way (except sanforization, which we’ll come back to). And that’s it! The simplicity is in the definition. However, in order to understand the real beauty of raw denim, you have to know a quick thing about indigo dye. Indigo dye is unique in that it doesn’t absorb into the fibers of the garment. Instead, it merely coats the fibers, which means it can rub off over time.

Without this characteristic, you’d never be able to get those oh-so-covetable “sick fades.” But since it is indigo, as the pants crease repeatedly over time, whiskers and patinas set in with beautiful and personal results.

This leads to one of the greatest things about well-worn raw denim. After several months (or years) of wear, those characteristics are truly unique to you in every way. As the fabric molds itself to your body, the patterns of wear and dye-transfer are a one-of-a-kind product of how the fabric interacts with your body. | A WELL-WORN PAIR | Three years later. They got even more worn after this photo. We’ll be showing a side-by-side with a brand new pair soon as part of Denim Month.

Now let’s talk real quick about some of the other effects of raw denim.

First, remember that it’s unwashed, and that most other garments you purchase come washed for a reason. Largely, because it gets the initial shrinking out of the way. Raw denim, being unwashed, however, will shrink.

The exception is that sanforized denim we mentioned before. While technically still raw denim – and, therefore, yielding the same great fades – sanforized denim has been put through a process involving heat, rollers, and more in order to minimize shrinking down to about 1% (regular raws can shrink an entire size, or two).

A second note is that unwashed and unworn often means stiffer and rougher out of the box, which can in turn mean a decent break-in period. You can minimize this break-in by choosing lighter-weight denim, although heavier denims yield more intense fades and tend to last longer.

A pair of raw denim, broken in over time, is almost like a bespoke suit.

Finally, as great as those fades are, they are the product of dye coming off of your jeans. This means there’s a pretty good chance that that dye is ending up somewhere else, like on your white sneakers (which are easy to clean) or grandma’s bright white couch.

But in the end, it can be safe to say that a pair of raw denim, broken in over time, is almost like a bespoke suit – perfectly fitted to and unique to your own body and not just a piece of clothing off the rack. And what’s better than that?

Featured photo via unknown; All other photography by Rob McIver Photo.