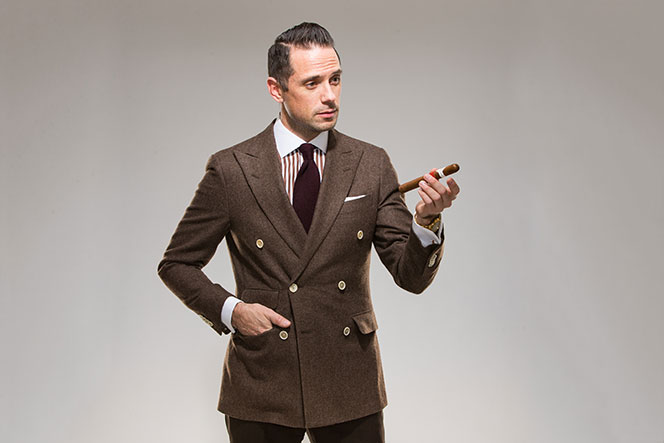 1 / 4
The double-breasted jacket actually had its roots in the sporting world. Cigar, old chap? Tally-ho! 2 / 4
And, back in the day, was actually banned by businesses as inappropriate office attire.
3 / 4
Now, of course, a double-breasted jacket is associated with power players in the board room...
4 / 4
...or style-conscious and sartorially-minded gentleman.
Glossary

Among the many classic menswear staples that have gone in and out of style only to see a resurgence in popularity recently, the history of the double-breasted jacket is particularly interesting and unexpected.

When you think of a double-breasted jacket/suit, what’s the first thing to come to mind? My guess is either a stodgy 80s or 90s banker-type or a wide-shouldered caricature of a mafia boss. Either way, it’s all formality and rigidity, right?

The double-breasted jacket was originally banned by many businesses as inappropriate office attire.

But that’s where your assumptions would lead you astray. In fact, the origins of the double-breasted jacket go back to a distinctly casual style called a ‘reefer’ jacket. Like most all men’s jackets, the reefer jacket was born in the sporting world. Originally very casual and usually worn as outerwear, in the late 19th century it was associated with gents heading to tennis matches or other country affairs, and was in fact banned by many businesses as inappropriate office attire.

The double-breasted jacket originated in the sporting world as a casual garment called the Reefer Jacket.

Yet, over time, the double-breasted jacket was slowly adapted into a more formal piece – a shift heralded in large part by the Duke of Windsor (who led many style trends of his time). However, even when he started wearing the style to official public outings, it was originally seen as gauche and poor taste (or rebelliously counter-traditional, depending who you ask). That said, once the double-breasted jacket became acceptable as business-wear, it very quickly lost almost all of it’s casual regard. Through the 1930s and 40s it became a solidly business-formal look, eventually becoming the uniform de rigueur of big-money men, whether they be bankers attending important board meetings on Wall Street or iconic mafia leaders like Al Capone.

And while those mob bosses wore the double-breasted look with much aplomb, the style gradually lost it’s flair, and by the 80s and 90s was relegated almost entirely to businessmen and frumpy insurance salesmen in ill-fitting and flat grey numbers – John Gotti, notwithstanding.

However, just as the recent wave of menswear enthusiasm has brought the more simple and versatile single-breasted suit back into the casual wardrobes of stylish men, the double-breasted suit has made a more widespread come-back as well. It’s a bold move, but the payoff can be a striking and distinctive look.