2 / 8
Part of what makes Luca Faloni such high quality is that they source their wool from Cariaggi, a third-generation Italian supplier known as one of the most prestigious in the world.
3 / 8
Of course, it's exceptionally soft too.
4 / 8
And the fit is fantastic.
5 / 8
The cable knit sweater is thin so it works well as a layering piece though it would look great on its own more casually with a pair of chinos.
6 / 8
How to do business casual.
7 / 8
Don't be afraid to wear a collared shirt under a crew neck sweater.
Collaborations

In partnership with Luca Faloni.

When you think of cashmere, I’ll wager there are three words that come to mind: soft, luxurious and expensive. All are accurate descriptions, yet the latter tends to be more than just a description–it’s a barrier to entry as well. Enter Luca Faloni, a new Italian company focused on high-quality and affordable wardrobe basics. 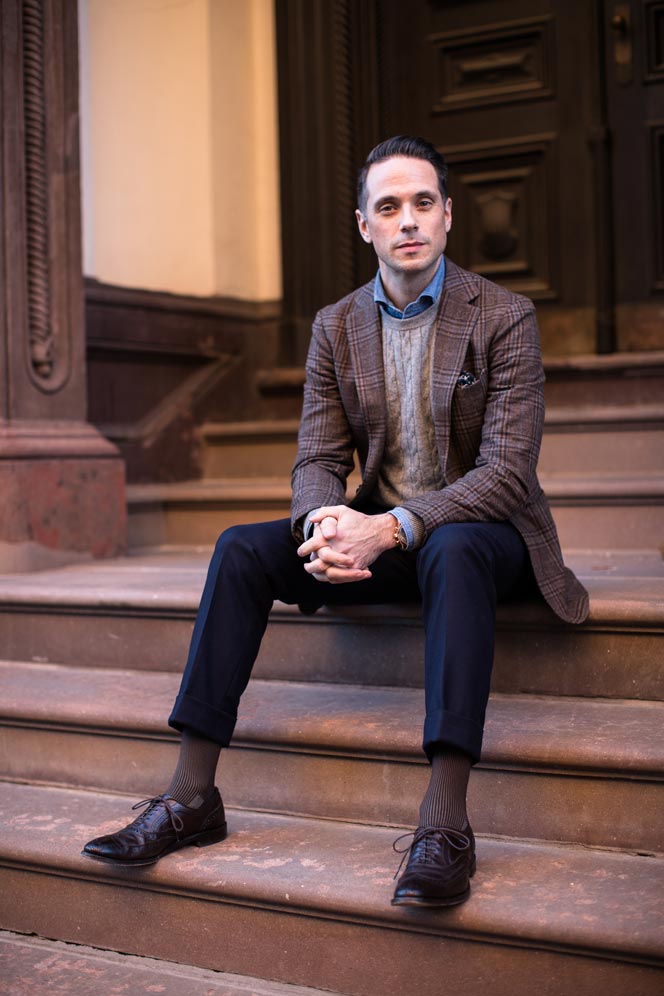 I’ll be honest, these days there are lots of upstart brands that promise that ultimate marriage of quality and craftsmanship at an affordable price. And the results can be mixed. In general, my experience is has been that their lofty claims never quite live up to the hype. So I approach most of them with a great deal of skepticism and it was no different when the box filled with a cashmere cable knit sweater, long sleeve polo, scarf, brushed cotton shirt, suede belt and leather card case from Luca Faloni arrived at the doorstep of my new home. 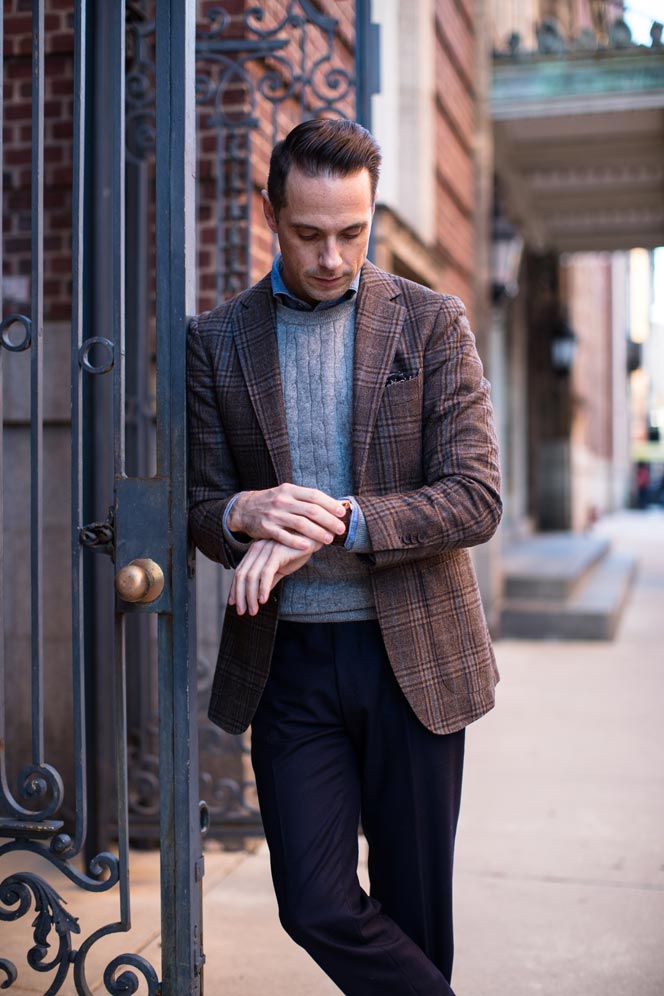 You should never judge a book by its cover, but there is something to be said about presentation and Luca Faloni really knows what they’re doing in that arena. Inside the box, each piece came wrapped in a soft cotton pouch. A very classy touch which immediately set the tone for a luxury experience. (I also really appreciated the inclusion of a small box of Pastiglie Leone candies.)

Now let’s talk about the garments themselves, specifically the cashmere pieces and brushed cotton shirt. Exceptionally soft. Just like you’d expect from cashmere (and brushed cotton). The quality is also impressive. And one reason for that is Luca Faloni worked very hard to find the right supplier. Their choice–and only supplier–is Cariaggi, a third-generation Italian mill known as one of the most prestigious in the world. And the fit? Perfect. What I love most about the Luca Faloni collection is that it’s full of staple pieces. The cable knit sweater I’m wearing in the first look here is fantastic as a layering piece. You can see I’ve styled it with a plaid blazer, denim shirt and navy trousers for a sophisticated business casual look. It would look just as nice worn more casually on its own with a pair of chinos. Over the past year or so, I’ve really been exploring the notion of “casual elegance” when it comes to how I dress–something that’s easy-going, but still luxurious and sophisticated. Hitting those notes depends on a few factors, including materials and style. And there are two pieces I want to highlight from Luca Faloni that are perfect examples of that.

I’ve actually been on the hunt for a long sleeve polo for quite a while and finding one in cashmere was a bonus. I can’t think of a better piece for relaxing at home or wearing for a low key day at the studio. Then there’s the brushed cotton shirt, which I’ve layered under the polo here, but have worn several times on its own. There is nothing like the feeling of brushed cotton and it also possess a rich texture.

Finally, let’s talk about price, which is always something to talk about when you’re talking about cashmere. The cable knit sweater and long sleeve polo retail for $340, while the brushed cotton shirt comes in at $175. Now, those aren’t drop in the bucket kinds of prices, I get that, but I challenge you to find similar pieces of such high quality and craftsmanship at those prices. I did a little comparison shopping and the best examples I was able to find were twice the price of the Luca Faloni pieces.