A strong, potent and leathery smoke

When one sees the word “ligero” anywhere near a cigar, it is more than likely that the stick will be packed with bold flavors and a nicotine rush. Ligero tobacco leaves grow on the top of the plant and are blended into all-powerful smokes. Ironically, the word ligero in Spanish actually means “light” – this couldn’t be further from the truth. The La Flor Dominicana Double Ligero Chisel I review below is a powerhouse as it contains twice as much ligero leaf as the norm. To all of the novice cigar smokers reading this, as a good rule of thumb if you know you’re going to smoke something strong, eat a substantial meal beforehand. You’ll thank me later.

Prior to smoking this stick I enjoyed a pretty heavy meal as I knew this cigar was going to be on the stronger side due to the use of ligero leaf. Right off the bat, this sucker is spicy and aggressive. My mouth starts to tingle with every single draw, similar to having Pop Rocks in my mouth. Flavors of wood and zingy pepper pervade the palate. Once the second third begins, the aggression tapers off but ramps up the black pepper. An almost cinnamon flavor comes into the finish similar to eating a piece of Big Red gum. Paired with this cinnamon is a strong leather flavor that is a hallmark of La Flor Dominicana sticks.

As I’m into the last third, the chisel end has finally become wide open and a charred meat flavor comes to the fore. As this happens the nicotine rush builds to a climax and the stick warms up tremendously. This is where I end my journey. 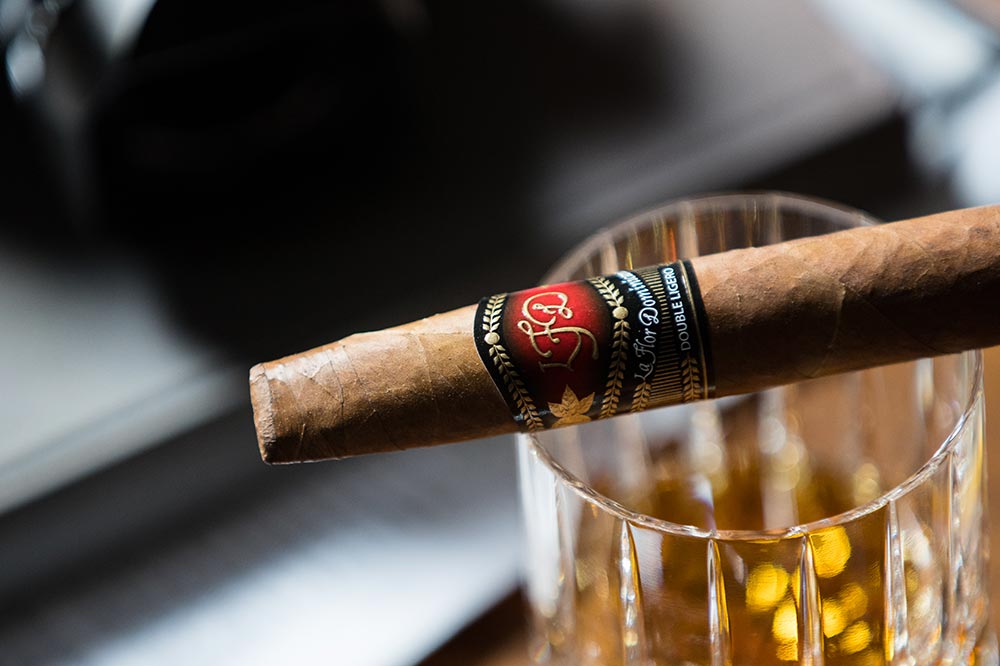 The construction on the stick is great though I will say that it is a bit tricky to cut as the guillotine cutter acts more like a pincher. Just note to have a very sharp cutter when smoking this bad boy. Another thing to note is what the chisel tip does to the smoke output. Though it may be a no-brainer, the volume of smoke in the final third was significantly greater than the first two due to the ring gauge expansion. Overall, quite an interesting cigar.

This cigar takes roughly 60-70 minutes to smoke. As for a drink pairing, pair this with something equal in body – a Laphroaig 10 Year perhaps. This cigar is for the advanced smoker as this is one of the most potent sticks I have ever smoked.

Overall, I would give this cigar a 8.25/10. This is not my most favorite cigar I’ve reviewed for HSS though I don’t dislike it either. The flavor profile and strength kick are just not for me. Taste is subjective, so you may like it, but buyer beware this cigar is not for the faint of heart.