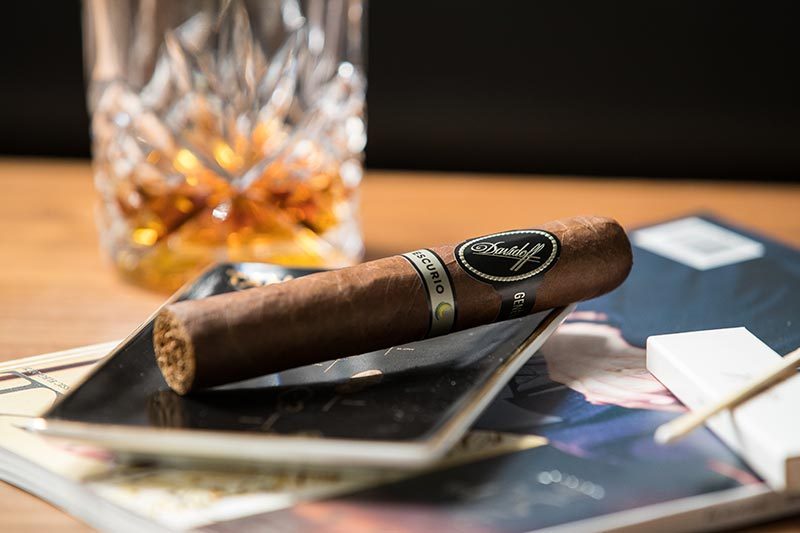 1 / 4
The Davidoff Escurio is nothing short of silky, containing absolutely no tooth and a glossy sheen. What do the Escurio Gran Toro and a Cohiba Behike 54 have in common?

Unique in more ways than one, the Davidoff Escurio line is a departure from the norm. So what is “Escurio?” Good question. It’s not an actual word on its own but rather a mix of two others: “Escuro” being Spanish for dark and “Rio” as in Rio de Janeiro, Brazil. To be frank, I can’t explain the intricacies of the blend better than the Davidoff marketing team so here’s what they have to say about it:

“In the world of cigars, Brazil is mostly known for its dark tobacco, called Mata Fina tobacco. Mata Fina is a sun-grown tobacco which is typically made into wrappers and used for premium, long filler cigars by many cigar producers in the Caribbean and Central America. Each Escurio cigar mixes the Cubra leaf – the fire of the Cuban Criollo refined – and the Brazilian Mata Fina leaf pulsing at the heart of this inspired blend of tobaccos. Dominican tobaccos and a Habano seed Ecuadorian wrapper add beautiful balance.”

Though I’m not one for larger ring gauge cigars, preferring to stay in the 48-54 range, I was incredibly excited to smoke this stick in the Gran Toro size. So without further adieu, I bring you the Davidoff Escurio Gran Toro.

In the hand, this cigar is nothing short of silky, containing absolutely no tooth and a glossy sheen. Lighting up and into the first few puffs and this stick is oily and slick, similar to having butter on your lips after enjoying lobster or corn on the cob.

Into the first third and I experience an amalgamation of wood, hay and grassiness that pervades the palate. Incredibly, this cigar does something in the first third that I’ve only experienced one other time in the entire time I’ve smoked cigars – absolutely no lingering flavor on the palate. What I mean is, after blowing out the smoke through the mouth and nose, there is no taste as if I hadn’t smoked a cigar at all. The only other time this has happened was when I smoked a Cohiba Behike 54 a year or so ago. Interestingly, both of these cigars had almost the exact same flavor profile. This lack of taste in the mouth is actually quite pleasing as you get a new opportunity every draw to taste all of the flavors the stick has to offer without being obstructed by previous ones.

Into the second third and a mild black pepper comes to the fore with an oakiness that comes in the finish. Towards the end of the second third, the flavors start to ramp up with the finish lingering well into the final third. Into the last third and the cigar acts like a roller coaster, back to a mildly oily and grassy finish, coming full circle. Coming as no shock, the construction on this stick is superb with an even burn all the way through producing an abundance of smoke.

This cigar takes roughly 120-140 minutes to smoke and is a great choice as either a mid-afternoon cigar on the golf course or a cigar to use while playing cards due to it’s long burn and mild strength. With this stick I was drinking a 7 and 7 but would recommend a beer on the lighter side such as a Saint Archer’s Blonde Ale to complement the mild notes of wood, grass and hay. This cigar is a great choice for a beginner to intermediate smoker as the strength and flavor profile are not overpowering.

Overall, I would give this cigar a 9/10. Due to the price point I would place this cigar more in the category of a celebratory stick than an everyday. Maybe I’m a sucker for mild to medium flavored cigars, but Davidoff hit this one out of the ballpark and for a guy that prefers his ring gauges on the smaller side, this Gran Toro was a pleasure to smoke.