Creed Viking Was Totally Worth The Wait I have to confess to being a bit of a Creed fanatic. However, unlike many, my entree into the world of Creed was not via Green Irish Tweed or Aventus, but rather through some casual magazine browsing and a leap of faith.

Some years ago, I was reading an issue of GQ when I happened upon a beautifully styled flat lay photo showcasing some of Prince Harry’s favorite bibs and bobs. Amongst those items was a bottle of Millesime Imperial. The clear bottle with its gold accents captured my attention and even though I had never smelled the fragrance in my life, I needed it. So I placed my order and a couple days later I’d found one of my favorite summer fragrances.

While I don’t necessarily condone purchasing fragrances without smelling them or trying them out first, I did it again with Creed’s Royal Oud and once again found the scent that I wear exclusively for extremely elegant evening affairs. Since I’d gone two for two with Creed fragrances despite my admittedly reckless and uniformed spending, the brand attained a certain elevated standing in my mind. Can you blame me? 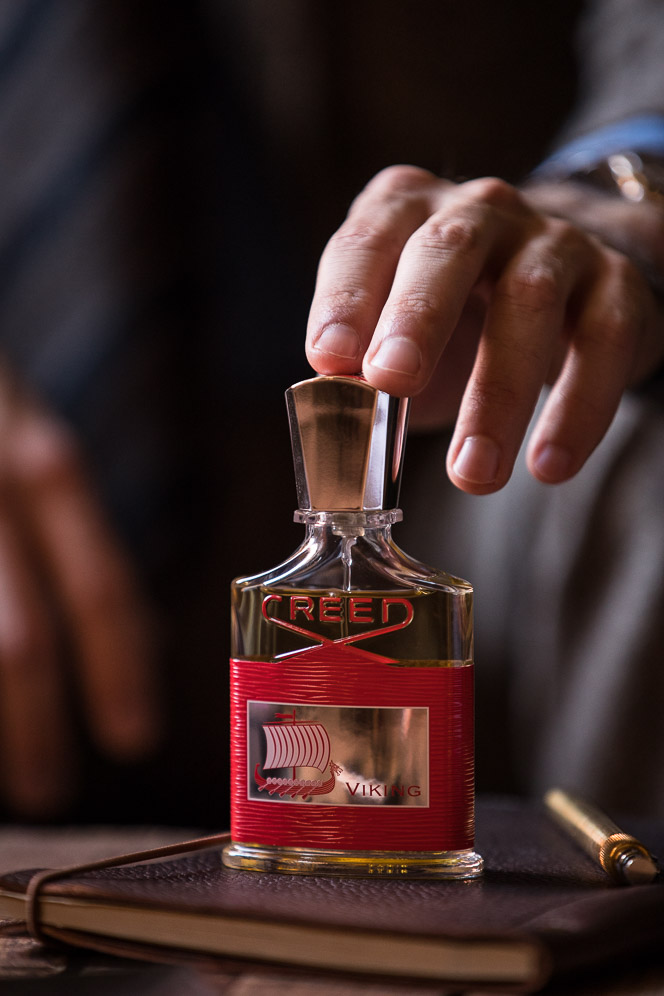 So, when I heard that Creed was releasing their first new men’s fragrance in seven years – Aventus was the last – I, like many other fragrance enthusiasts, was beyond excited to see and smell what it was all about. That fragrance is called Viking and this is my review.

Before we get into my personal thoughts, however, let me share the description you’ll find on the Creed website along with the fragrance notes:

Viking, a fiery men’s fragrance that bottles the fearless spirit of boundless exploration for the modern man who goes against the grain. Inspired by the incredibly crafted longships, a centerpiece of the Viking Age and one of the greatest design feats of the ninth century. A symbol of voyage and undeniable perseverance, longships were carefully designed for the skilled seaman who embodied unbridled determination to conquer. As you might glean from the official description, Viking is an assertively masculine fragrance. The first spray onto my skin is full of deep, rich wood and spice notes. It’s fairly powerful to start but begins to mellow and thin out (in not a bad way) after about five to 10 minutes. After that, I start to notice more of the citrus top notes. These blend extremely well with the base notes of sandalwood and patchouli giving Viking a very appealing balance.

The way I set this review up, it may seem like there isn’t a Creed fragrance that I don’t like, which is untrue. I appreciate Royal Mayfair, but it’s not for me. Similarly, Taborome Millesime: really interesting but almost too cerebral for my taste. Viking, on the other hand, I knew I liked the first time I tried it. Why? Well, Viking checks a lot of boxes for me. First and foremost, it’s interesting and unique. I always love fragrances that have that certain something special that they compel people to inquire about what it is that you’re wearing. Black Afgano does that. Frederic Malle’s Bigarade Concentree does that. Creed Viking does that. It’s also masculine, not overpowering (a moderate sillage), and is fairly versatile.

I say “fairly” versatile because, to me, Viking is more suited for fall and winter wear due to its spiciness and woody undertones. During the cold seasons, this is very much an every day wear. It also has a sort of sexiness that would make it more than appropriate to wear for evening activities – I could see it going over extremely well on a cocktail date (first date or otherwise), dinner, holiday party or anything other kind of nighttime social activity.

If there’s one thing that disappoints slightly – and very slightly, I might add – it is Viking’s staying power. It’s bold to start, yes, but after about an hour it becomes a little airier and slightly briny, which is a nice evolution for sure, but for me, after about four to six hours, I’m hard-pressed to detect it on my skin. No problem if you’re wearing it for an evening affair, but for an all-day wear, just be aware in case you were going right to a date after work. Might want to refresh, in that case. Creed Viking is an extremely welcome addition to the Creed fragrance line as well as to my fall/winter fragrance collection – I’ve been wearing it almost daily for the past few weeks. If you’re looking for a fragrance that’s unique, masculine and elegant, I highly recommend giving Viking a try.

Chime in: Have you tried Creed Viking yet?