Every Single Detail Of What I Wore On My Wedding Day Because all the details matter…

Tuxedo. My tuxedo came from my good friends at Michael Andrews Bespoke, which may come as no surprise to regular readers as I’ve been working with them almost exclusively for the better part of the past two years. Over the past nearly six years, I’ve had the chance to experience many bespoke and made to measure suit programs and MAB is just head and shoulders above the vast majority of options out there. I wanted my wedding tuxedo to be super classic but also something on the special side–the former so I could continue to wear it for black tie events in the future and the latter because, hey, it’s my wedding! The classic started with the fabric–Dormeuil tonik, the gold, or should I say diamond, standard for tuxedos–and the grosgrain lapels. The special touches included making it double-breasted, going with bold 4.5-inch lapels, a cocktail cuff and a single pleat on the trousers. I’ve already written in-depth about all the finer details of this tuxedo and you can read the complete story of my final fitting here.

Dinner Jacket. I’ve had a special relationship with Dominic Montefiore, the Creative Director of Edward Sexton, for a number of years now and when I told him I’d like to commission a dinner jacket for the reception–what’s wrong with having two looks at your wedding?–he was both flattered and surprised. He said, “Are you sure you want to do such a strong shoulder for your wedding?” The answer was, of course, yes. Not only have my tastes evolved in this area over the years, but I thought the occasion merited it.

If you couldn’t already tell, the inspiration for this dinner jacket came from one place. Of all the gin joints, in all the towns in all the world… Yes, Rick’s jacket in Casablanca. I know I’m not the first to be inspired by this iconic piece of movie menswear and I will surely not be the last, but I’m proud to have an extremely special version of that jacket cut specifically for me by two friends across the pond. Bow Tie. Those in the know, know that the best bow ties in the world come from Le Noeud Papillon in Sydney. Nicholas sells pre-cut bows, but he also does bespoke work as well, which was good news for me because the pre-cut bows are just slightly to large for my face. After some WhatsApp back and forth, Nicholas cut me a bow in premium grosgrain in his very unique modified butterfly pattern.

Braces. Here’s where you will really see that I decided to go all out… Just as I had two shirts, I also wore two different sets of braces. With the tuxedo, I donned some classic Brooks Brothers black formal braces and with the dinner jacket, these beautiful white moire braces from Albert Thurston. 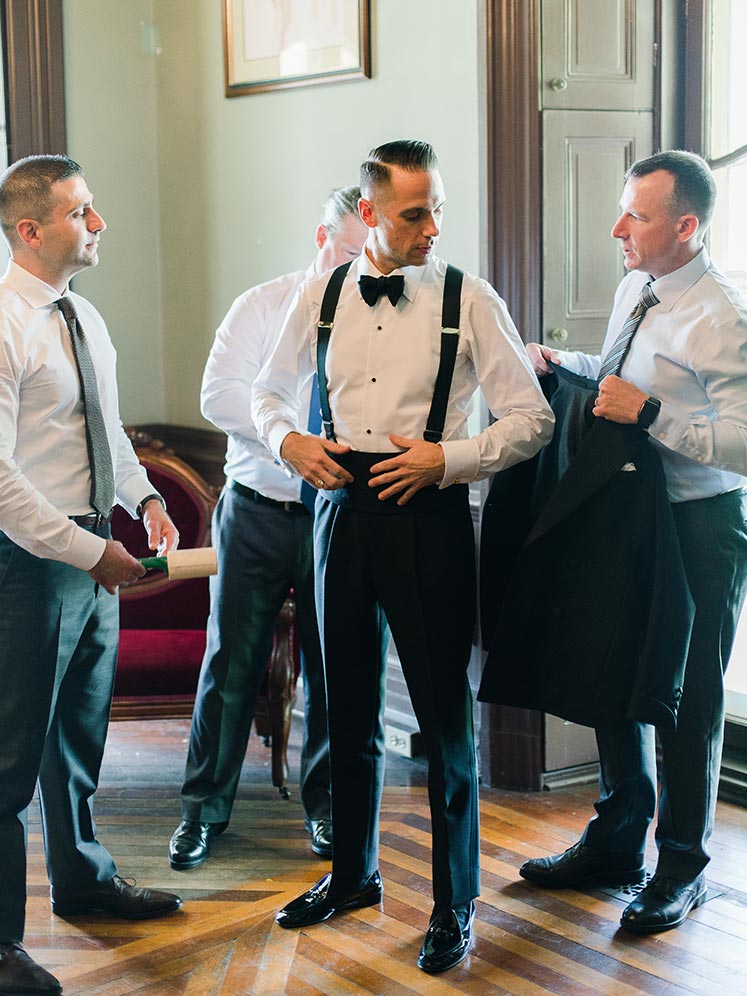 Cummerbund. I flirted with the idea of going all-out with a Charvet cummerbund, but a cooler head prevailed and I chose a more economical option from Turnbull & Asser. I will say that if you are looking to really do it “right”, you should not skimp on the cummerbund. During my search, I help many, many limp grosgrain cummerbunds in my hand and there is something to one that is made with a quality fabric. It has a structure and heft that just feels like you’ve done it proper.

Pocket Square. Although I couldn’t find it in me to pull the trigger on a Charvet cummerbund, I did furnish myself with two Charvet silk squares–white for the tuxedo and off-white for the dinner jacket. Simply the best in the world.

Watch. Whether or not to wear a watch with black tie is a subject of intense debate among some folks. You can read my take on the topic right here. (Even though you know my conclusion by looking at this post, it’s still a good read and interesting to come at it from both angles.) Nevertheless, there are only a handful of watches that, in my opinion, look proper with a tuxedo. It’s got to be time-only–bonus points for no second hand–and, for me, in yellow or rose gold. As I personally do not have such a watch in my current lineup, I was honored that my friends at Vacheron Constantin were kind enough to provide me one of the most elegant and special pieces in their entire collection–the Historiques Ultra-Fine 1955. There’s not much else to say other than it is simply exquisite and elegant. And not to mention possibly the perfect watch to wear with a tuxedo.

Cufflinks & Stud Set. The key with cufflinks and studs, especially when you’re talking formalwear, is to match your metals. My cufflinks were gold “love” knots from Brooks Brothers while the stud set came from Codis Maya. I will mention that the studs were rose gold, but I found that it was a better match to the watch and cufflinks than the yellow gold. I also liked how the onyx picked up the black from the watch strap. Shoes. Two shirts, two pairs of braces and, yes, two pairs of shoes–though they were both from the same maker, Belgian Shoes NYC. The first, more formal pair, are patent Henris and the second pair are black suede Mr. Casuals–i.e. the most comfortable shoes I have ever worn. Watch now, all your favorite “bloggers” will start wearing them. You’re welcome, guys.

Socks. If you’re going to do black tie the right way, you’ve got to wear the right socks. Which means they have got to be silk. I prefer Bresciani. Signet Ring. A special bespoke monogrammed piece made for me by the exceptional folks at Rebus Signet Rings.

Fragrance. Often what I refer to as the final detail of any outfit, my fragrance choice was more or less up in the air until the day before. Choosing the correct fragrance is dependent on a variety of things, including the season, time of day and the weather. The latter consideration played the biggest role in my choice.

The forecast was for a moderately muggy day with a chance of thunderstorms and highs in the mid-80s. Prior to the wedding, Robin requested that I wear Black Afgano, as it holds a special significance for both of us and, well, just smells damn sexy. However, I determined that it would be much too overwhelming with the threat of oppressive humidity. I eventually decided the right choice was Creed’s Spice and Wood. It’s a pretty “dry” scent, which I felt would cut through and stand out if it was muggy, without being overpowering. It’s also elegant, which fit the occasion and dress code. And it’s masculine in the most sophisticated way possible.