Originally known for the famed San Lotano Oval line, A.J. Fernandez added the wonderful New World line of cigars that are both rich in flavor and downright beautiful to look at. I’ll let Cigar Aficionado take the wheel on how this cigar came to be:

“Named in honor of the discovery of tobacco by the Christopher Columbus expedition in 1492 . . . Fernandez collaborated with his father, Ismael, on the cigar, which is comprised of a wrapper from Nicaragua that covers binder from the Jalapa Valley and a filler blend of Ometepe, Condega and Estelí tobaccos.” 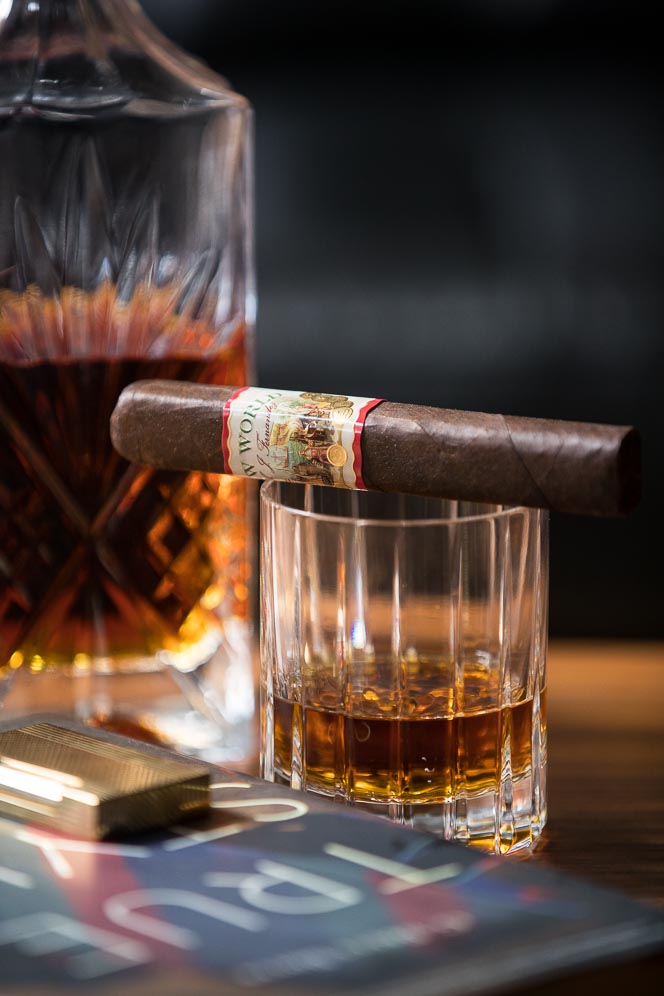 Now onto the review.

Before lighting up any cigar I always like to really inspect it to see how it feels in the hand. This dark, box pressed cigar has the texture of a supple brown paper bag and has a strong scent of cocoa and earth. I’m usually not too impressed with band work on cigars as many are pretty plain but the New World’s band is something else – rich in detail and incredibly vivid. On the band there is a portrait of explorers, assumed to be from the late 1400s. It’s the small things in life that make things wonderful. As the second third continues, the pepper takes a back seat to a cocoa and espresso mix. The flavor reminds of Mexican hot chocolate. The final third is really an amalgamation of the espresso, chocolate, wood and earth, something that is both unusual and enjoyable. To note, the strength really takes a leap in the final third as the stick begins to get warm to the touch. For many, the middle of the final third will be their last stop. The overall build of this stick is flawless. The box press is just right, not too rigid and not too loose. The burn was even with no touch-ups or relights needed.

This cigar takes roughly 55-65 minutes to smoke. As always, pair your stick with something equal in body, in this case maybe a nice espresso to complement the subtle coffee notes. This cigar is for the intermediate smoker who enjoys full body cigars with dessert-like flavors. Overall, I would give this cigar a 8.75/10. The boldness of flavor, superb construction and most importantly price make this stick a winner. At a $6.00 unit price, who could complain? These will be stocked in my humidor in perpetuity.